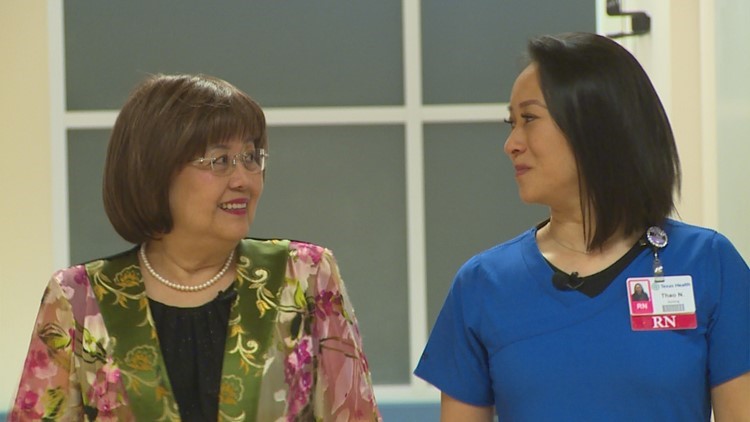 A promise to pay it forward: Mom and daughter who fled communism find purpose in nursing

Of all the nurses at Texas Health Presbyterian, no one appreciates her job more than 39-year-old Thao Nguyen.

However, the first thing to know about Thao's story is that it's not her story. “It’s not really about me, you know," Thao said, fighting back tears. "It’s because of the choice my parents made years ago, risking everything they had for me.”

Just one year old, Thao and her parents, and nearly one million refugees just like them, crowded on to small fishing boats to escape. Many who were captured were either kidnapped or killed.

After four days at sea, the boat Thao and her family were on was attacked by pirates. “We were terrified because they had knives and other things that could kill us," said Thanh Nguyen, Thao’s mom. "To our surprise, they quickly took our valuables and left.”

Their family fled Vietnam in 1981 and both vowed to help others since arriving in the United States. WFAA

Eventually, they were rescued by the USS John Young and brought to the United States, where Thanh promised to give back to the country that gave them a home.

She enrolled in college, became a nurse and spent 29 years caring for others before retiring last year.

Today, Thao is walking in her mom's footsteps, caring for newborns in the NICU. It's her own way of saying thank you and a life more than her mom could've ever hoped or dreamed for. “When I set foot in the U.S. land, I whispered into her ear, my then 17-month-old daughter, 'We promised you an excellent education and a caring heart to embrace love and give love," said Thanh. "My dream [has] come true.”

"I love life," Thao said, again fighting tears. "I’m grateful for the air that I breathe and to have an opportunity to help others just like people helped us.”