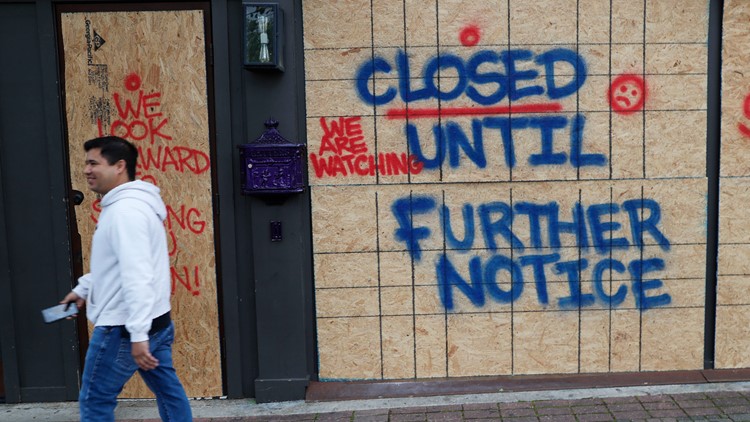 This story originally appeared on The Texas Tribune.

That number, included in the Labor Department’s monthly report released Friday, is the government’s clearest and most comprehensive look at the economic devastation in Texas since the coronavirus pandemic first swept the state in March.

Previously, the state’s worst-ever monthly unemployment rate was 9.2% in November 1986, as Texas reeled from the last big oil bust. Now, with more than 2 million Texans who have filed for unemployment during the outbreak, the contracting oil industry is only part of the state’s economic problems.

The April unemployment rate for Texas, 12.8%, is the state's worst on record. The number, included in the Labor Department's monthly report released in late May, is the clearest and most comprehensive look at the economic devastation in Texas since the coronavirus pandemic first swept the state in March.

“We are in some sense a state having to deal with two extraordinarily negative circumstances all at once,” Venkatesh Shankar, an economist and director of research at the Center for Retail Studies at Texas A&M University, said in an interview.

And perhaps no economic indicator matters as much as the public health data related to COVID-19. In explaining his rationale for allowing businesses to reopen, Abbott has zeroed in on two figures. One is the ratio of positive cases to tests conducted. The other is the hospitalization rate — the proportion of infected Texans who are requiring hospitalization.

Both those numbers have trended down over several weeks, but Texas is still often seeing 1,000 or more people test positive for the virus each day.

“We never had a steep rise, but we haven’t hit anywhere near a plateau,” Shankar said. “The question is: You have to open the economy to a certain extent. When the economy starts to come back and cases come back again, how will unemployment be affected then?”

Economists have said Texas could struggle to bounce back from the economic calamity caused by COVID-19 even though businesses across a wide swath of industries are allowed to reopen because of the double whammy Shankar described the coronavirus leading to shuttered businesses combined with weak oil prices.

The pandemic's damage has been swift and spared no sector of the Texas economy, leading to bottlenecks at food banks, renters evicted and scrambling for housing, college graduates without jobs and many jobless Texans not receiving unemployment benefits due to the Texas Workforce Commission’s inability to fully respond to the surge in demand.

The price of oil, which for the first time ever briefly plunged negative in April, is tightly tied to the Texas economy and state budget. On Wednesday, Gov. Greg Abbott, Lt. Gov. Dan Patrick and House Speaker Dennis Bonnen directed state agencies and colleges to reduce their budgets by 5%.

The result will mean worse services for Texans, who are already feeling the effects of a ravaged economy in the middle of a pandemic. Oil producers have had to make the tough choice to close wells, restaurant workers have had to navigate confusing orders issued by Abbott as dining rooms have started to reopen, and immigrants working in meatpacking plants in West Texas have had to endure large coronavirus outbreaks.

The crisis “has shone a blinding light on our state’s geographic, economic, and social systems, revealing their vulnerabilities so clearly that their existence can no longer be debated or denied,” read a recent report titled “A Playbook for Resiliency: Creating Opportunity for all Texans,” released by the University of Houston and the University of Texas at Austin.

RELATED: Right on the Money: How to protest your property tax appraisals

Recent jobs reports have shown that lower-wage workers have been affected disproportionately by the coronavirus, and Shankar agreed, adding that parts of the energy sector might never return as companies have lost such steep amounts of money.

Despite the eye-popping economic numbers, analysts are concerned about incomplete data because "the economic impact of the sudden drop in activity may be much more far-reaching than the already-devastating headline unemployment number,” S. Michael Sury, lecturer of finance at UT-Austin, wrote in an email to The Texas Tribune.

Keith Phillips is a senior economist at the Federal Reserve Bank of Dallas. He and his and colleagues at the bank, normally focused only on economic data, have also been tracking health numbers. It is the "elephant in the room" that cannot be ignored when rejuvenating the economy.

“The health thing is driving the economics,” Phillips said.

RELATED: Right on the Money: Virtual job fair in Dallas will feature almost 40 companies who are hiring

Some other countries, Phillips said, such as South Korea, were able to corral the virus more quickly through testing and contact tracing, "and we were slow."

"We’re going need to do that in order to keep confidence up so people feel safe going around and doing their business," Phillips said.

The Texas Tribune is a nonpartisan, nonprofit media organization that informs Texans — and engages with them – about public policy, politics, government, and statewide issues.