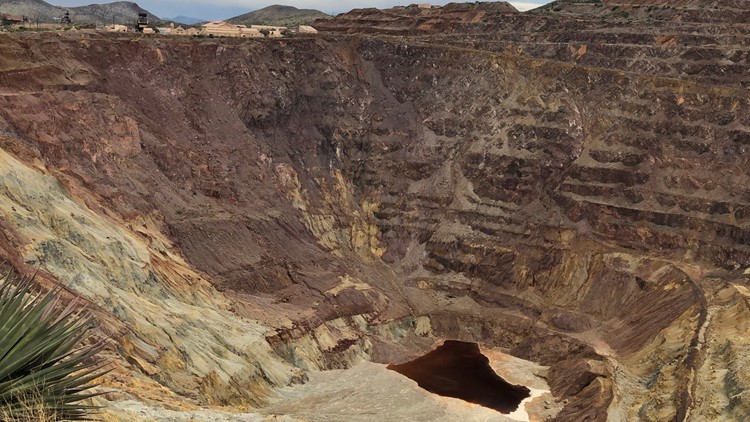 Photo by: AP
FILE - This, May 12, 2019 file photo, shows what's left of the Lavender pit mine outside the southeastern Arizona city of Bisbee, where the copper operation stopped in 1974. A federal judge on Wednesday, July 31, 2019, has overturned the U.S. Forest Service's approval of a Canadian company's planned new copper mine in southeastern Arizona. The judge ruled the agency improperly evaluated and considered water use issues associated with the Rosemont Mine planned in the Santa Rita Mountains on part of the Coronado National Forest. (AP Photo/Anita Snow, File)

Arizona copper mine ruling expected to have national impact

TUCSON, Ariz. — (AP) — A federal court ruling against a planned Arizona mining project is expected to have national repercussions if upheld by higher courts, experts said.

The mining industry has decried the ruling against the proposed $1.9 billion Rosemont Mine, The Arizona Daily Star reported.

The U.S. Forest Service's approval of plans for the new copper mine in southeastern Arizona was overruled July 31 by U.S. District Court Judge James Soto.

Conservation and tribal groups praised the ruling, saying it recognized the Forest Service's failure to protect public land and resources.

Toronto-based Hudbay Minerals Inc. has said it would appeal the ruling blocking construction of its project southeast of Tucson.

The mining project was planned to be a half-mile (0.8 kilometers) deep and a mile (1.6 kilometers) wide and spread across federal, state and private land. The mountainous area is home to endangered jaguars and cougars, black bears and deer, as well as the Madera Canyon, one of the premier U.S. bird-watching spots.

The hard-rock mining industry has lived under a favorable legal climate since Congress passed the 1872 Mining Law to encourage mineral exploration of public lands. The ruling will almost certainly force the industry to push Congress to overturn the law, he said.

The mine was expected to create 500 full-time jobs and 2,500 construction jobs but would disturb 5.7 square miles (14.8 square kilometers) of national forest.

FILE - This file photo taken Monday, May 12, 2019, off Arizona scenic state Highway 83 shows the eastern slope of the Santa Rita Mountains where Canadian firm Hudbay Minerals Inc. plans an open pit copper mine. A federal judge has overturned the U.S. Forest Service's approval of a Canadian company's planned new copper mine in southeastern Arizona. The judge ruled, Wednesday, Aug. 1 2019, the agency improperly evaluated and considered water use issues associated with the Rosemont Mine planned in the Santa Rita Mountains on part of the Coronado National Forest. (AP Photo/Anita Snow,File)
AP

Two lawsuits filed by opponents of the Forest Service approval — four environmental groups and three tribes — successfully argued that only public lands directly above valuable mineral deposits are covered by the 1872 law's definition of mining rights.

Soto found the Forest Service erred in approving the mine without determining the validity of claims on public land where Hudbay Minerals planned to dump waste rock and tailings.

"This ruling affirms the fundamental principle that nobody gets a free pass to destroy our public lands," said Stu Gillespie, an attorney for environmental law firm Earthjustice.

Mining company attorneys said the ruling usurps the role of government agencies, could bring chaos to federal mining reviews and will add delays in permitting.

They said the ruling "will likely be received with shock throughout the hard rock mining industry."