Midland finding its place in the space industry

Investors estimates it could be the next trillion-dollar industry. That’s why city leaders are banking on the need for a spaceport in Midland. 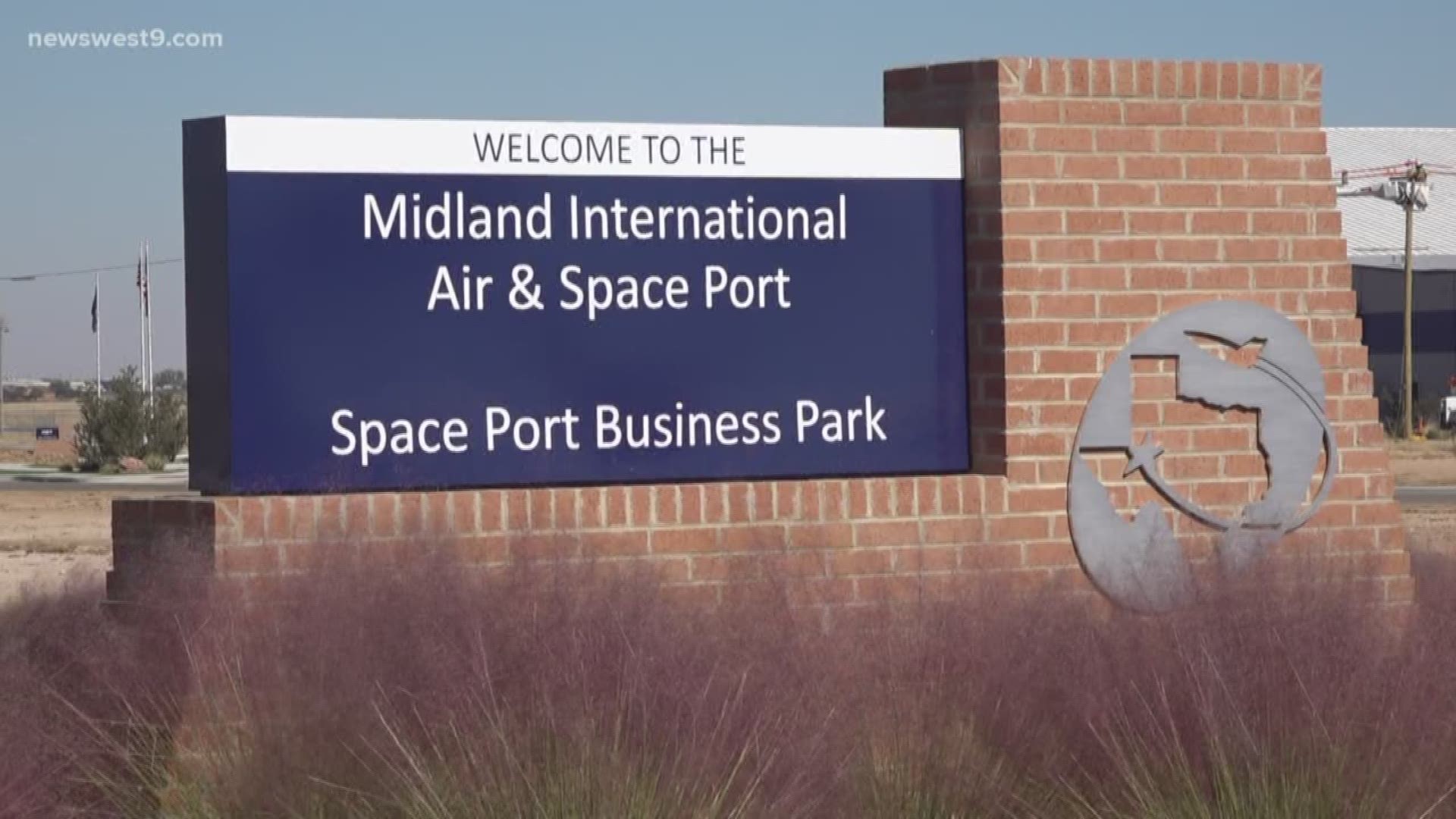 MIDLAND, Texas — Cities around the country are looking to the sky for its future…literally. Take Houston for example – the city just broke ground on a spaceport at the Ellington Airport.

Houston city leaders break ground on land for suborbital vehicles
HOUSTON - Houston will launch and land suborbital vehicles from its spaceport that's officially under construction. The Houston Spaceport at Ellington Airport has been a concept for 4 years. Friday, city officials and project partners took their official first step toward concrete reality with a ground-breaking ceremony Friday at Ellington Field.

“This will lay the ground work to support the companies that produce the cutting-edge innovations needed to take commercial space travel and aviation into the sub-sonic, super-sonic and hyper-sonic realm,” Houston Aviation Director Mario Diaz said.

Intuitive Machines is the first private company to sign on as a spaceport tenant. In May, Intuitive Machines received a $77.2 million contract from NASA to create, launch and land its NOVA-C spacecraft to the surface of the moon.

Sounds familiar…Midland began its endeavor to the great unknown in 2014 when it earned its spaceport license.

As of today, the FAA has 11 active licenses for commercial spaceports. Of those, five have yet to host or launch a landing – Midland included. When people think of commercial space travel, televised launches and names like Elon Musk and SpaceX quickly come to mind.

The people responsible for Midland’s spaceport say you likely won’t see something like that in Midland. In terms of business, space is still a young industry, though it’s growing at a rapid pace. CNBC estimates it could be the next trillion-dollar industry. That’s why city leaders are banking on the need for a spaceport in Midland.

An investor's guide to space, Wall Street's next trillion-dollar industry
This is your guide to investing in space right now, with insight on the top space companies from analysts and investors.

Midland’s economy is already booming – you can see signs of growth all over town. From crowded roads and restaurants to new neighborhoods under construction, Midland is the land of opportunity.

A perfect example of that growth is at the airport.

“We’ve been counting passengers since 1965, there have been only two years busier than this year,” Director of Airports Justine Ruff said.

More people are finding their way to West Texas; so much so that Ruff says they’re running out of space.

“If you called me right now, ‘hey I have a King Air, I want to come to Midland,’ I don’t have anywhere to put you. We’re full,” Ruff said.

Finding space is certainly a challenge out at the airport, in more than one way. The city has five years invested into its spaceport. It’s first mission to create suborbital spacecrafts with Xcor did not pan out.

“We took a big risk in terms of bringing in a company that failed,” MDC chairman Brent Hilliard said.

But before you’re critical of any business decisions, know this: “Overall, it has been a really good thing for us,” Ruff said.

“A majority of that investment is still operating at the airport,” Hilliard said.

The funding provided by the Midland Development Corporation rebuilt dilapidated hangars and turned a rundown portion of the airport’s property into a business park – a multi-million dollar asset that is being used today.

“We’ve got buildings, a roadway in, infrastructure. We can bring aviation or space,” Ruff said.

Brent Hilliard, the chairman of the MDC, says they’ve learned a lot from their past deal. Making the seemingly impossible possible comes with setbacks.

“Space is far more complicated than just a rocket that takes off,” he said.

There are a lot of factors at play with what is and what could be. To put it simply, Midland’s spaceport mission will likely not be what you see online and TV.

“We are a spaceport in the sense that we have a space company that’s in business on our property. It’s not doing the sexy launches in Florida, but it never will be and that wasn’t necessarily intended to be that.” Hilliard said. “You have to understand who you are and how that relates to what you’re chasing.”

He says one thing we must all understand is that the space industry is new and growing fast – a combination that makes it high risk.

“You have to choose where you want to be at on the risk profile. For us, we’ve chosen the middle to low range risk,” Hilliard said. “We don’t think of spaceport as just space. For a lot of folks, they think we’re going to the moon, we’re going to mars, all these different places. It’s so much more broad than that.”

So where does Midland fit in the growing industry? Here’s one avenue: satellites. AST and Science is the spaceport’s current tenant. The company creates and assembles ultra-powerful satellites to launch in low earth orbit.

“We could see a four percent return on our investment – that’s unheard of,” he said.

Other ways Midland could support the space industry could be through design, engineering parts or testing new technology – the sky is the limit.

“You can’t be small minded in what you want to do. Small minded meaning having the mindset that we don’t need space because everyone has a job that wants one. Even though we’re at full employment doesn’t mean everyone working enjoys what they do,” Hilliard said. “That’s where space comes in. Space for Midland could be and is currently, if you don’t like what you’re doing in oil and gas, you can go to work for AST.”

While nothing could likely ever change the industry West Texas is known for, space could be another avenue to attract and keep bright minds in West Texas.

The scope of the space industry is very complex. Right now, deals are either through government contracts or private. As the industry grows, so do opportunities. That’s why the people involved in this deal aren’t worried – they’re in it for the long haul. A report from CNBC states Wall Street’s consensus is that space will become a multi-trillion dollar economy in the next 10 to 20 years.

That’s why leaders stand behind Midland having a spaceport designation – this is a long-term play that could bring new jobs and revenue to West Texas.

Right now, Midland’s spaceport is being utilized to design and manufacture satellites. In the future, Midland could be used as a site for supersonic or hypersonic travel. That type of technology already exists and as it advances, Hilliard says Midland very likely could be a testing site for it.