With a smile and with confidence, injured athlete vows to walk again

Justus Edwards, 21, recovering from a serious spinal cord injury he sustained in a football game, this week reached another milestone toward his goal. 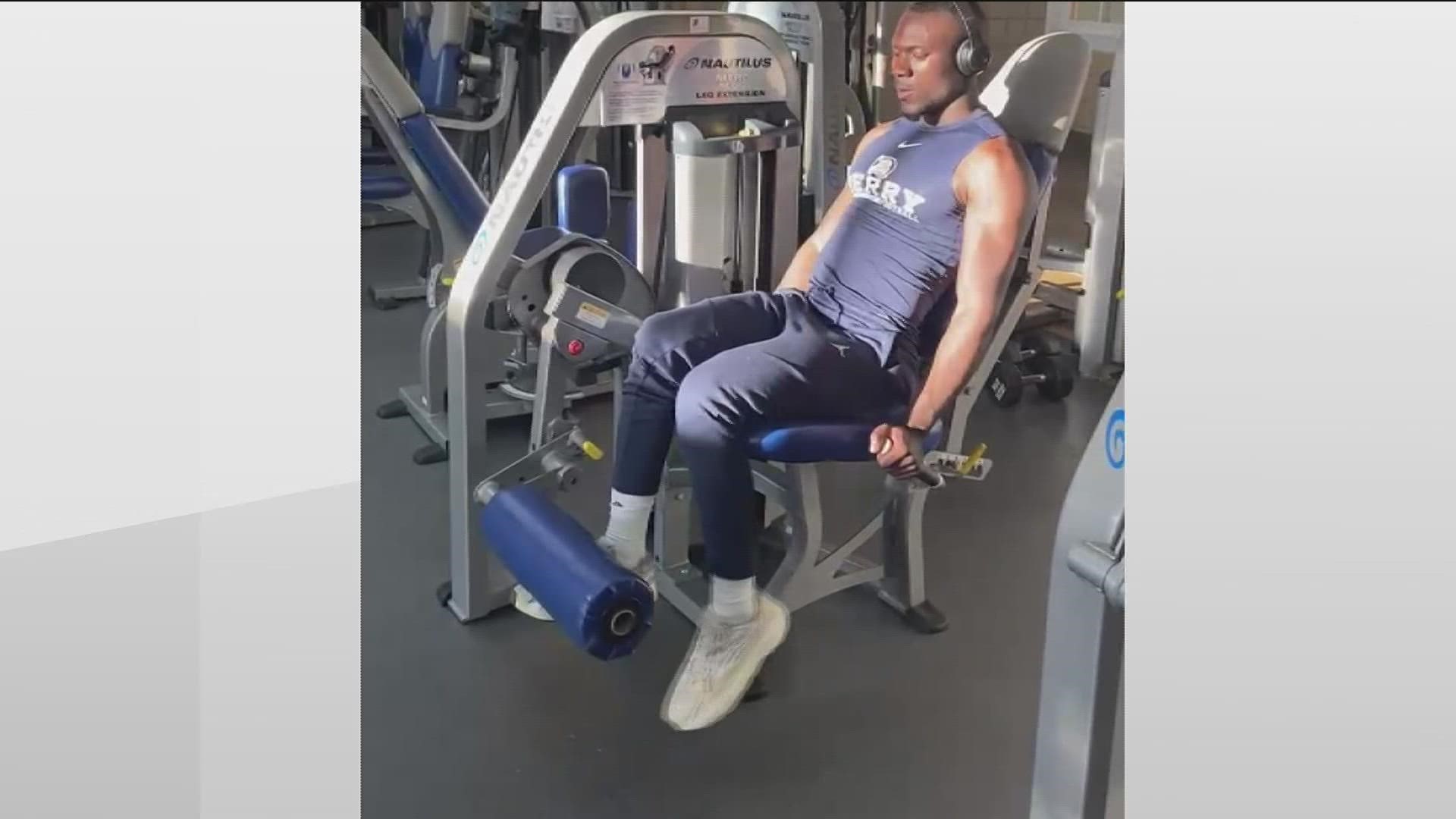 ROME, Ga. — It was a moment that took everyone’s breath away, and still inspires to this day. Two years ago, Justus Edwards, a football player with the Berry College Vikings in Rome, walked back onto the field a year after he suffered a devastating spinal cord injury during a game.

He used a walker. It was a struggle for him, but he smiled as everyone in the stadium cheered.

Now, two years after that milestone, Edwards has achieved another goal, which brought tears of joy to his eyes.

As he describes it, your dreams, and your faith, he says, just have to be bigger than any limitations others might think you have.

“You’ll be able to accomplish the goals that people once said that you couldn’t do,” Edwards said Friday.

Coming up on three years since he was injured in that football game-- and at the time, doctors gave him little hope of ever walking again -- his relentless and intense physical therapy have resulted in another milestone.

This week, in the weight room, “I was really just in the gym, working out,” Edwards was able to do leg lifts on the weight machine for the first time, after trying, for months.

“And it was a “wow” moment, it brought tears to my eyes, actually,” he said. “Because I remember nights where I used to stay up and dream, and just dream about that moment of just being able to voluntarily move my legs again, and be able to lift weights again.”

He posted a video on his Instagram showing his leg lifts.

“The reason I posted it was to encourage others out there that’s in the same position to never give up. Never give up on your dreams, and if you stay consistent, you will reach your goal.”

Edwards, now 21, is completing his final term at Berry College.

RELATED: 'God made that happen for me,' says college football player with paralyzing injury who defied odds to walk on field

“I plan to go on to the University of Alabama Birmingham to become a doctor of physical therapy. That way, that I can help other people in the same field.”

This past December, Edwards created a foundation, The Just-Us Foundation, raising money on his Instagram through T-shirt sales and donations in order to support others with spinal cord injuries, and to support their families.

His foundation has already contributed to the care of seven patients.

“We want to include and to help individuals in all aspects—spiritually, mentally, emotionally and physically—to turn their dreams into reality,” he said. “Why not be that person that can help somebody else get back on their feet?”

He said one aspect of the support the foundation offers is making sure patients and their families have the physical therapy and the equipment they need for their recoveries.

Edwards pulled a keepsake out of his wallet. It is the athletic tape he was wearing in the game when he was injured. He had written on it a favorite scripture, Proverbs 14:23, and other motivational quotes to help him through the game.

Credit: Justus Edwards
The athletic tape, with motivational quotes, that Justus Edwards was wearing in the game when he was injured; he keeps it in his wallet to inspire him now.

“And I keep it in my wallet for motivation. And this means a lot to me," he said.

"You know, every day may not be rainbows and cupcakes, it may not be the best days, but if you just push through those tough days, keep your faith in God, you'll be able to accomplish the goals that people once said that you couldn't do."

Berry College athletics bestowed on him the Justus Edwards Inspiration Award — naming the award after him — to recognize students who uplift people around them while battling to overcome obstacles and challenges.

He is writing a book which he hopes will be released on September 22, 2022 —four years to the day after his injury — to offer his “blueprint for people to get back on their feet” after they experience devastating injuries or other setbacks in life.

He also has another goal he wants to achieve.

“By the end of this year, my goal is to be walking with no assistance. And I will do it," he said.

Edwards has become a motivational speaker and a lay preacher; he describes the role his faith has played in his recovery. His schedule includes a speaking engagement with the Fellowship of Christian Athletes on October 20, at 6:30 p.m., 4454 Alabama Highway, Rome, GA  30165.