Rick Horton has made it an annual tradition to create a work of art out of the snow at his Greenfield home. 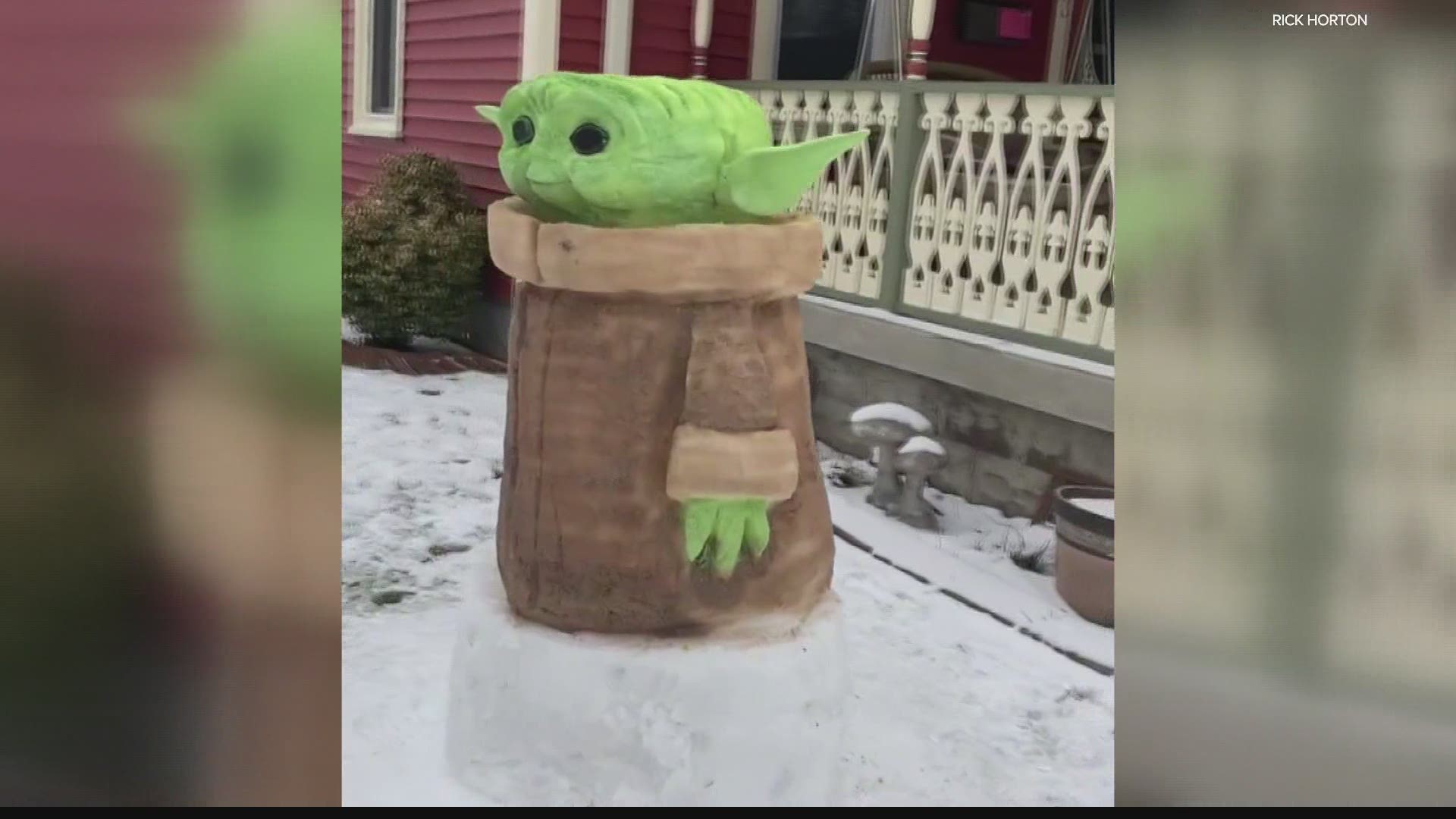 INDIANAPOLIS — The galaxy is not so far, far away: State Street and Forest Avenue in Greenfield.

That’s where you’ll find Grogu, a "Baby Yoda" from the Mandalorian Star Wars TV series, made from snow. The pea green-skinned alien in a brown robe is the latest creation of snow artist Rick Horton.

"Just so happens I live on a very busy road, so it usually gets a lot of attention,” said Horton, as a vehicle driving by gave a friendly honk of the horn.

Once a winter, Horton waits for the right weather and makes a snow masterpiece. He started with a bust of Homer Simpson in 1997.

Credit: Rick Horton
Homer Simpson was the snow sculpture that started it all.

He's most proud of the two bald eagles he sculpted two years ago, and the rattlesnake that slithered in his snowy front yard in 2010.

Horton asked for ideas this year and picked Grogu after much indoor preparation.

"I knew this had to look as close as possible,” said Horton. “So, I did a lot of research. I even sculpted one out of clay so I would have something to go by."

Horton hit the perfect weather this year - a snowfall followed by a cold snap.

Grogu is still frozen after more than a week. The snow creations usually don't last that long due to rain or temperatures above freezing. But the force is with Grogu, who took seven hours to build on Jan. 31. The face and the ears created the biggest challenge.

"The reward is all the people that come by and see it and smile and come by and forget about everything else,” said Horton. “Seeing the kids out here just in awe. That's a great feeling."

Besides visitors who stop by to take photographs, snow Baby Yoda has reached 18 million people on Rick's Facebook page "The Snow Artist".

"I knew people would like it,” said Horton. “I had no idea they'd like it as much as they do. It's just amazing."

Rick has made amazing snow sculptures for more than 20 years now. He admits to already feeling the heat for what's next, even before Grogu melts away.

1 / 5
WTHR
Rick Horton of Greenfield sculpted a five-foot-tall "Baby Yoda" from snow in his front yard.