Orphaned baby Alaska moose on its way to Colorado zoo

The new calf was orphaned at about six days old outside of Anchorage, Alaska when his mother was involved in a fatal human-wildlife conflict. 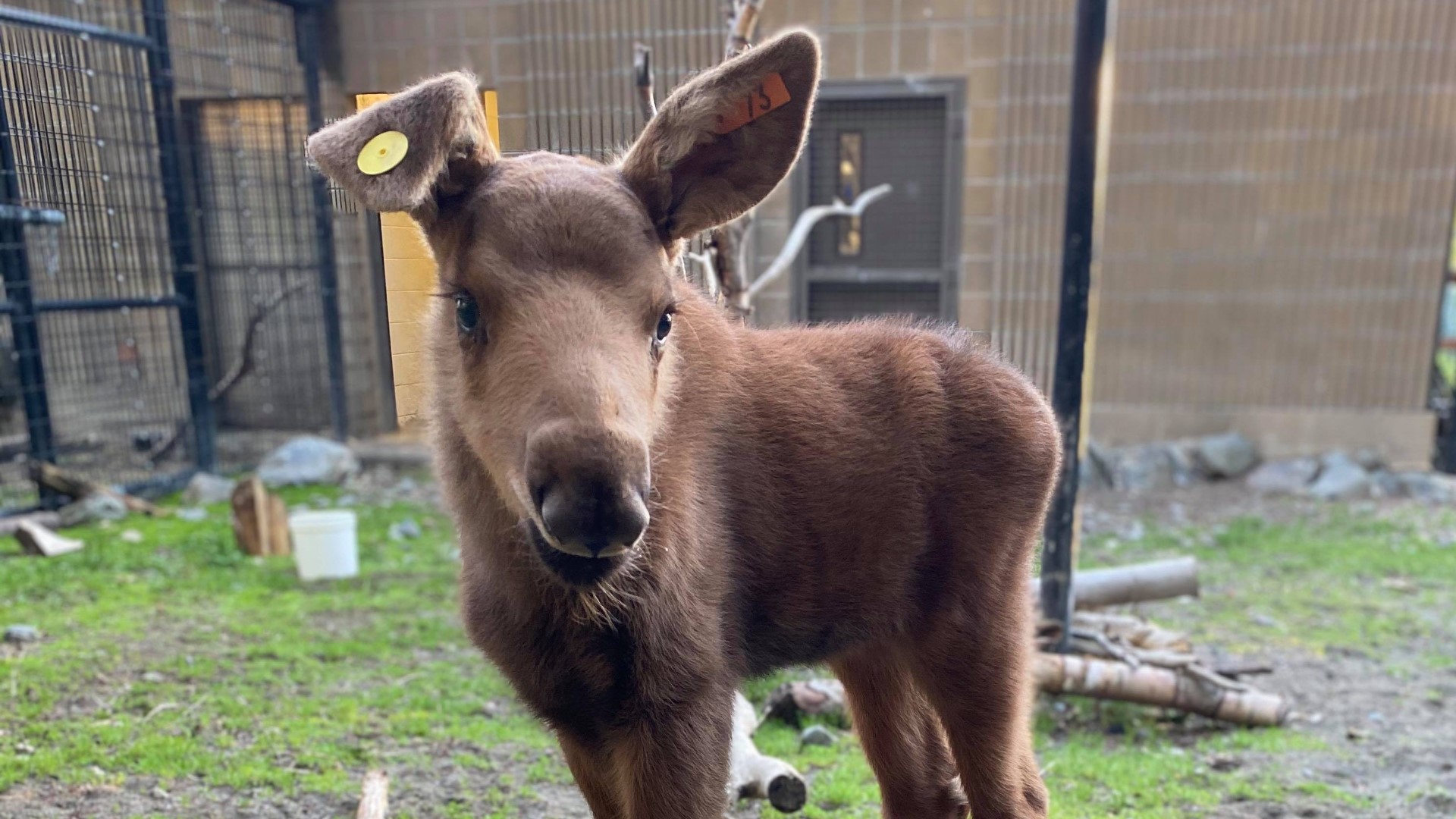 The moose was orphaned at about six days old outside of Anchorage, Alaska, when his mother was involved in a fatal human-wildlife conflict. He has since been in the care of Alaska Zoo.

The male moose has not yet been named.

Moose are extremely rare in zoos, and this arrival comes only two months after the loss of the Zoo’s beloved 12-year-old Canada moose, Tahoma.

> To see the moose's transport to Colorado, see the videos at the bottom of this article.

"People have seen an increase in activity in the moose yard, over the past several days, as we prep it for the calf’s arrival,” said Rebecca Zwicker, Rocky Mountain Wild animal care manager. “Our guests have been really curious about the updates we’re making in the moose yard, so we’re excited to share this announcement."

"While we’ve been in the yard, ‘babyproofing,’ we’ve had some wonderful interactions with guests sharing condolences and stories of how Tahoma touched them. It’s clear that Tahoma’s legacy is in place," said Zwicker. "He touched a lot of hearts, young and old. This little guy has some big hooves to fill, but from what we hear from his keepers at Alaska Zoo, he’s up to the task."

“We knew we wanted to continue Tahoma’s incredible legacy with another moose, but we didn’t know it would happen this quickly,” said Courtney Rogers, lead animal keeper in Rocky Mountain Wild. “It’s a bittersweet situation, because of course, we wish this young calf could have continued living in the wild. But, since that was not possible, we’re grateful we’ll be able to care for him here. Since Tahoma passed, Rocky Mountain Wild has definitely been missing some ‘moose magic,’ and we’re so excited to help this little boy grow up."

Cheyenne Mountain Zoo staff members are on their way to Alaska Zoo to meet the little calf and transport him home.

Starting Tuesday, July 14, the zoo will share updates of the team’s travels as they make their way home to Colorado Springs. Moose fans everywhere can witness the young moose’s journey home on Tuesday and Wednesday via Cheyenne Mountain Zoo’s Facebook and YouTube channels.

The baby moose is still being bottle-fed, which will continue until he’s about three months old. He would not have been able to survive in the wild without his mother, but did benefit from having his first few days of his mother’s milk, according to Cheyenne Mountain Zoo.

“We’re super excited, but also kind of feel like new parents,” said Zwicker. “When Tahoma came to us, he was about 10 months old, so this is the first time we’ve had such a young moose. We’re trying to be as prepared as possible. We have spoken with his keepers in Alaska and gotten great advice from other animal professionals who have cared for moose this young. But, we’ve also just accepted that this is going to be kind of a wild ride. He’s going to find some things to get into, and he may catch us off guard from time to time, but we’re also looking forward to watching him being a mischievous youngster. We have to channel our inner mama moose skills, and show him how to live his best life as an ambassador at CMZoo.”

“Tahoma weighed over 1,000 pounds and this little guy only weighs about 90 pounds, so there are several parts of the exhibit that could have been unsafe for him if we didn’t make changes,” said Rogers. “We hear from his Alaska Zoo keepers that he gets the ‘zoomies’ a lot, and he’s so small that he will likely be able to squeeze through or under some of the moose exhibit fencing, so we’ve been getting the exhibit ready for this young, inexperienced and excitable calf. We can’t wait to meet him.”

Cheyenne Mountain Zoo is one of only eight Association of Zoos and Aquariums-accredited institutions in the United States to house moose.

To keep the new moose safe, a smaller temporary enclosure will be set up in the moose exhibit. Keepers will supervise calf ‘field trips’ into the main exhibit, to teach him the ropes and evaluate his comfort, before he graduates to full-time access to the entire exhibit.

He'll also have a barn to sleep in while he's small with sand and soil beds that can be kept damp to keep him cool while he adjusts to Colorado's warmer weather.

“Tahoma truly was one-of-a-kind,” said Rogers. “Moose keepers visiting from other zoos remarked at how calm and laid-back he was. It’s going to be fun getting to know a new moose personality! For those who only knew Tahoma in his senior years, it can be difficult to remember that he was once a young moose running around the exhibit, trying to knock over trees and sparring with his enrichment. We fully expect this youngster to keep us on our toes with his antics.”

Zookeepers say going from caring for a 12-year-old moose with age-related issues to caring for a baby who’s learning how to be a moose is going to be quite a change of pace.

“With Tahoma, we spent a lot of time preparing and administering medications and medical treatments to keep him comfortable in his elder years,” said Rogers. “Instead of preparing ‘med sandwiches,’ now we'll be preparing bottles. Just like we did for Tahoma, we'll be monitoring this young calf’s food intake, his weight and his activity to make sure he’s getting everything he needs from us. We also may need to babysit or walk with him around the exhibit, which we are pretty excited about.”

RELATED: 2 hippos to return to Colorado after Missouri 'vacation'