“This is not the way we drew it up, but if we were going debut the building this is certainly a great way to do it," Rob Matwick said. 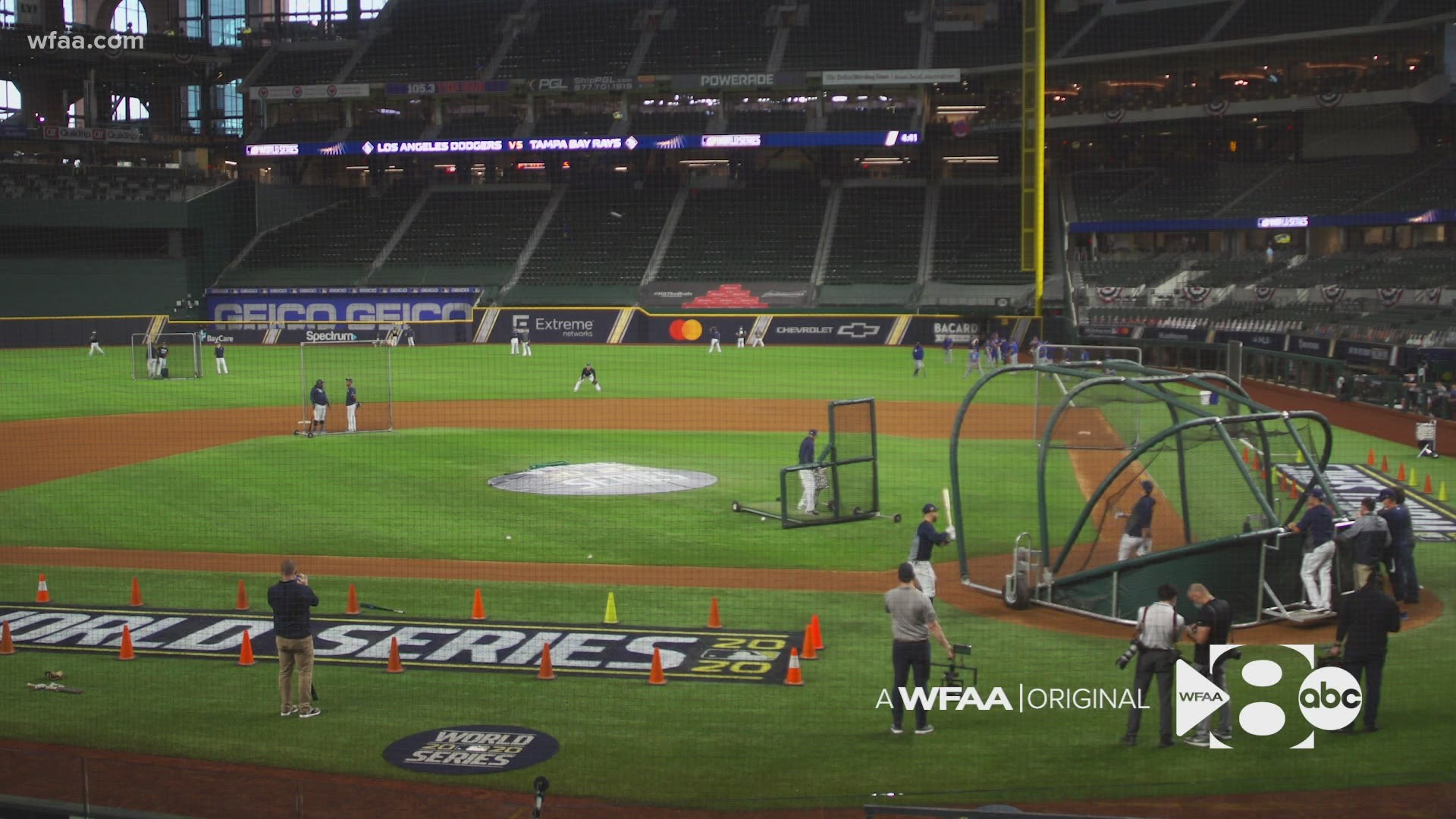 ARLINGTON, Texas — It was mid-March when the sports world came to a standstill.

So did the rest of the world.

It felt like everything we hold sacred was upended – from the freedom to go out to dinner, to the joy of visiting loved ones. From weddings to funerals. From the drama of the NBA postseason to the pageantry of Major League Baseball’s opening day.

Perhaps nowhere else in America was the baseball world rocked like it was in Arlington.

The Texas Rangers were less than three weeks from debuting their billion-dollar, brand new ballpark when the coronavirus closed it.

“Initially I thought it would be a week, maybe two,” said Rob Matwick, the executive vice president of Rangers Business Operations.

The inaugural event at the park was to be a concert headlined by Chris Stapleton with an appearance from Willie Nelson.

It was postponed on March 12 – two days before it was scheduled to happen.

RELATED: Rangers set for Opening Day in season that promises to be unlike any other

MLB announced a temporary postponement of the season that same day.

Within weeks it became clear that the Rangers season, and thus the debut of Globe Life Field, might not happen at all in 2020.

“It was such a buildup and then all of the sudden it’s like, it crashed,” said Fred Ortiz, a principal at HKS and the architect who led the Globe Life Field project.

MLB restarted its season in July, but cardboard cutouts had to substitute for fans all summer.

The league decided postseason games would be played at neutral sites and chose Arlington to host the biggest prize of all – the World Series.

“This is not the way we drew it up,” admitted Matwick. “But if we were going debut the building, this is certainly a great way to do it.”

Fans streamed into the park for the first time ever during the National League Championship Series.

But hosting the World Series days after opening is a first for any MLB stadium.

“I was ready to cry,” said one Tampa Bay Rays fan who'd just stepped into the park to see a game in person for the first time in months. “We love baseball.”

Perhaps no one was happier to see the park awake than the man who dreamed it up.

Ortiz is the oldest of five brothers - all obsessed with sports and gifted with athletic talent.

He grew up poor in an El Paso housing project.

He and his brothers used to gather the neighborhood kids and walk to a nearby little league field to play ball against kids from a block or two over.

But before walking out the door, he remembers taking out a piece of paper and drawing up the field.

He was clearly cut out for a career in architecture, but his bigger dream was to play for the Dallas Cowboys.

He landed a scholarship to The University of Texas at Arlington where he played on the final football team the school ever fielded.

When the university announced it was dropping its football program, he contemplated transferring to chase his NFL dreams elsewhere.

But a high school coach convinced him to stay in Arlington and get his degree.

Arlington would become the city where he took in his first-ever major league baseball game, and the site where he fell in love with the Texas Rangers.

"I remember Turnpike Stadium," he said.

He went on. "I remember watching Charlie Hough throw knuckleballs. Somehow I was able to sit behind home plate and watch that ball not move.”

After earning his degree, Ortiz moved to Virginia.

But when he landed on the Globe Life Field project, he moved back to Texas.

When he went to Game One of the NLCS, he walked in with his wife and took a loop around the concourse before sitting down in their seats.

Shortly after the national anthem and first pitch, he told her: “We gotta get up again.”

“I like to say I’m playing the role of anthropologist,” he said.

He walked around to the spots he thought people would gravitate toward and was thrilled to see he was right.

The cardboard cutouts had been a nice gesture all summer, he said, but watching real fans watch baseball inside his stadium was priceless.

"Goosebumps," is how he described it.

Playing in front of fans in the middle of a deadly pandemic presented an enormous logistics challenge, Matwick said.

“We were taking a great leap of faith with our fans that they’d follow the rules,” he said.

It is not easy to keep people apart in a facility built to bring them together.

“Honestly, to a large degree I think what we’re doing here is creating a blueprint that hopefully all baseball teams can use next year to welcome fans safely into the ballparks,” Matwick said.

“There was no playbook for this,” he said.

For a week and a half in Arlington, the upended world of sports felt almost right – the only thing missing was the team for whom the park was built.

“We’re working on that,” Matwick said.