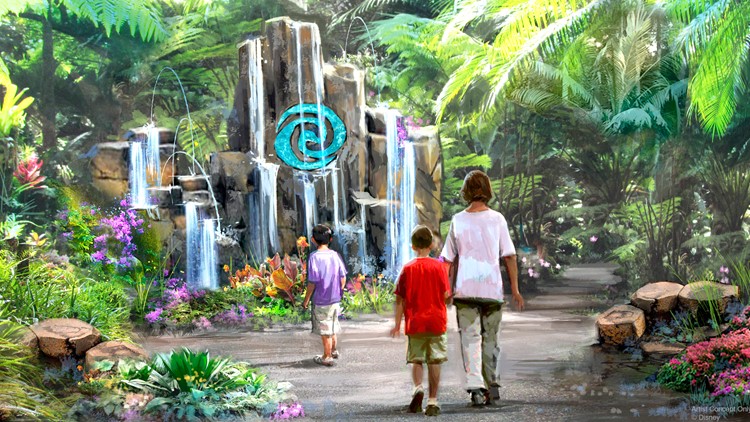 Photo by: Disney
This lush exploration trail will invite guests to meet and play with magical, living water.

ORLANDO, Fla. — Get ready, Disney fans! For the first time ever, Moana is getting an attraction inside a Disney park.

Welcome to "Journey of Water, inspired by Moana."

This new walk-thru "exploration trail" is coming soon to Epcot at Walt Disney World in Florida.

An opening date for the attraction has not been revealed, but it comes amid many changes expected at Epcot in part of a multi-year transformation. Among those enhancements includes the previously announced Guardians of the Galaxy roller coaster, which is already under construction.

"Epcot will be unified with four neighborhoods that take guests to new destinations where the real is made fantastic in a celebration of curiosity, hands-on wonder and the magic of possibility," according to Disney officials.

But that's not all... Coming this October, the park will open a new pavilion called the Epcot Experience.

"Inside this first-of-its-kind offering within a Disney park, guests will discover engaging and interactive exhibits that allow you to step inside the relentless innovation, energy and excitement and see some never-before-revealed details driving the future of Epcot all throughout this unprecedented period of transformation," Disney officials said.

Want more? Disney is promising even more updates coming to the parks, which will be revealed at their D23 Expo on Sunday.

Epcot at Walt Disney World Resort in Florida is undergoing a historic transformation, bringing the next generation of immersive storytelling to life through a plethora of new attractions and experiences. Epcot will be unified with four neighborhoods that take guests to new destinations where the real is made fantastic in a celebration of curiosity, hands-on wonder and the magic of possibility.
Disney